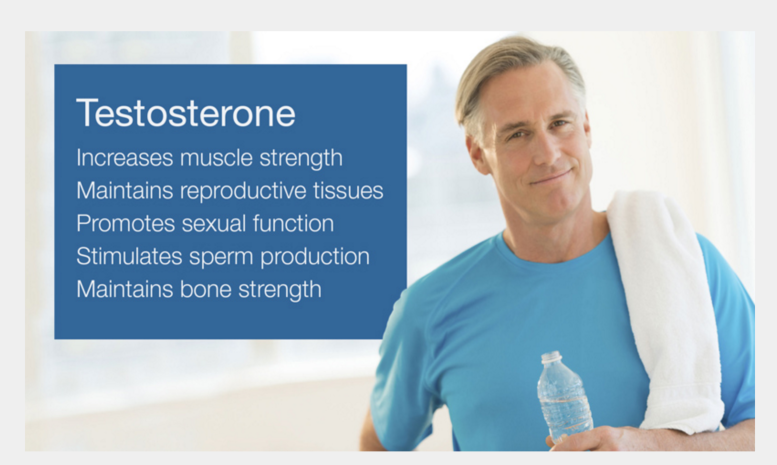 6 Effects of Testosterone in Your Body, However, the body changes as we age and loses some of its regenerative capacity. A fundamental part of this decline roots from a slow-down in our hormonal secretions. Simply put, even young people with glandular issues who do not produce enough testosterone and/or HGH experience side effects and maladies that are usually only associated with much older individuals. Conversely, older patients with higher hormone levels, be it naturally or via hormone replacement therapy, have health benefits normally associated with younger individuals.

Also, Women’s Can Be at Risk for Low Testosterone:

The ovaries are responsible for producing both testosterone and estrogen, as the ovaries age, they produce less estrogen and testosterone. As women enter peri-menopause and pre-menopause, testosterone will be diminished by the age of 30’s, and once a women reach full menopause, it’s common for them to produce 75% less testosterone than they did in the there 21’s. Every woman becomes at risk of low testosterone as she ages, and women who go through hysterectomy or oophorectomy have an even higher chance of dealing or having low testosterone in women levels. 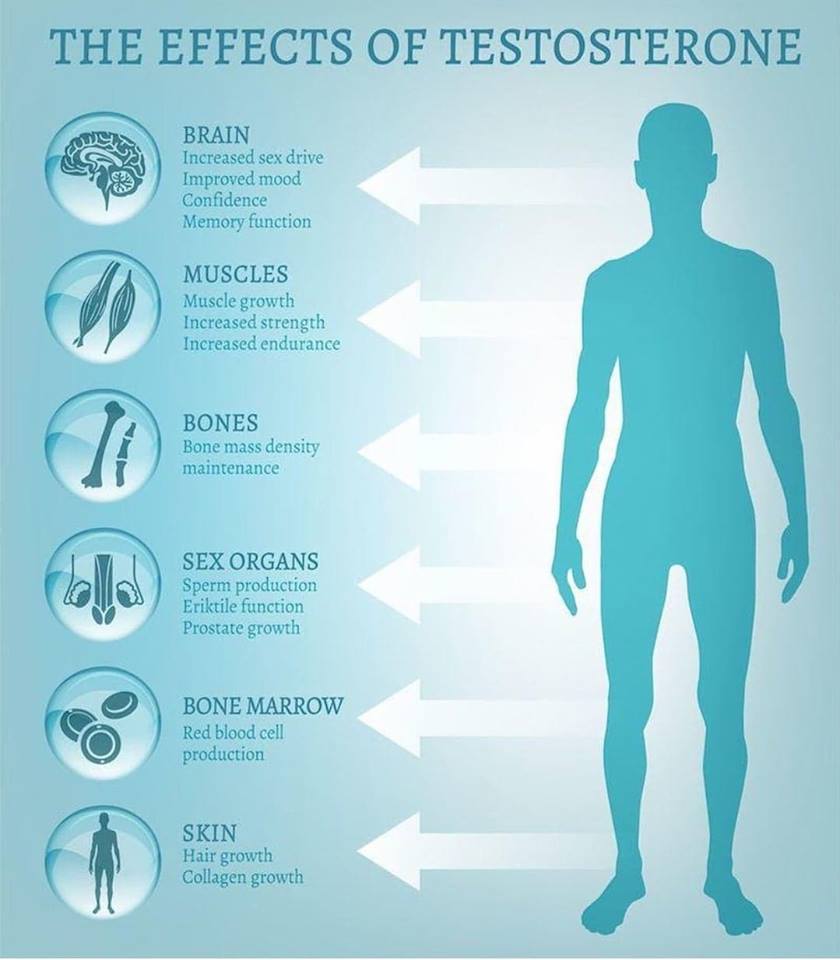 Research has shown that women have a significant advantage when it comes to a few things, Like memory and language, while men tend to have stronger spatial skills (though this too has been disputed). But due to ethical restrictions, no study had been able to track the direct effect that testosterone exposure has on the brain—until now.

The hormone also plays a role in your state of mind, including how well your brain works. That’s why low testosterone has linked to symptoms such as mood swings, increased stress, and depression. … “Cells in the brain have testosterone receptors, and low testosterone in those receptors are significantly affected mental health.”

Recent studies have shown that men as they age, they lose more muscle mass than women of the same period, and has led researchers to believe that the loss of muscle strength and has it has a direct link to the predominantly male decline hormone, like testosterone. Testosterone helps to build muscle mass and strength in young men.

Testosterone supplementation in men increases fat-free mass, but whether measures of muscle performance, such as maximal voluntary strength, power, fatigability, or specific tension, are improved has not been determined. … A seated leg press exercise defined maximal voluntary muscle strength and fatigability.

Growth hormone (GH) has also been used to reverse or correct erectile dysfunction and other sexually impeding disorders and the primarily by improving circulation and blood flow, which results in a firmer, more sustainable erection.

Erythropoiesis affects the production of new red blood cells. One is accomplished primarily in the bone marrow, the red blood cell factory. Erythropoiesis is stimulated mainly by erythropoietin (hence, the clever naming of that hormone!). … Androgens, including testosterone, are another type of hormone.

Testosterone and other androgens have an erythropoietic stimulating effect that can cause polycythemia, which manifests as an increase in hemoglobin, hematocrit, or red blood cell count. … If hematocrit elevated before starting testosterone, the cause should determine before beginning androgen therapy

A man or women with shrinking levels of testosterone actually may lose some body hair. Testosterone replacement therapy comes with a few potential side effects, including acne and breast enlargement. Testosterone patches may cause minor skin irritation.

In fact, research now suggests that bioidentical hormone replacement therapy (or BHRT) can actually reverse many of the signs of aging and that you may have come to accept – weight gain, low libido, reduced muscle mass – and can even help to prevent conditions such as osteoporosis, heart disease, and dementia.

Testosterone is stimulated and produced by the testes and is key to driving male sexual behavior. Although testosterone is a sex hormone, it plays many crucial roles in the body. It is responsible for regulating a man’s sex drive (libido), bone and muscle mass, fat distribution and the production of red blood cells, Decreased libido and sperm. The body begins to produce testosterone as early as seven weeks after conception, with levels reaching their peak at puberty. As men age, levels of testosterone start to drop, and this affects individuals in different ways.

Decreased libido: Low levels of testosterone cause a reduction in sex drive.

Depression: When a person experiences low testosterone levels it alters hormone production, which can lead to depression.

Fatigue: A decrease in testosterone levels leads to hormonal changes, which can cause fatigue. This can be exacerbated by low testosterone-induced sleep loss, which can easily turn into a vicious cycle.

High Cholesterol: High cholesterol is a silent killer that can lead to a variety of heart conditions. Testosterone injections, when used in a proper protocol, can lower cholesterol, blood pressure, and triglyceride levels.

Low Energy & Fatigue: Symptoms of aging can be a direct result of diminishing levels of testosterone or (Low-T) in the body. As we age, our bodies produce less and less testosterone, causing low energy and fatigue.

Memory Loss: Some recent evidence suggests that testosterone might help prevent and treat the effects of brain aging. Some patients treated with testosterone injections expressed a palpable increase in their cognitive function, short- and long-term memory, and vocabulary improvements.

Thyroid: The hormones produced by the thyroid and adrenal glands regulate key processes throughout the body. If thyroid hormone and cortisol levels are abnormal, the rest of the body does not function properly.

Weight Gain: The production of certain hormones decreases after the age of 30. The lean body mass of some organs also starts to decrease, whereas fat mass increases. 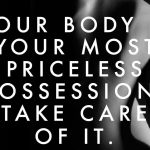 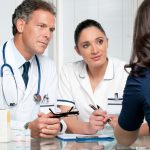 Memory Loss: How Bad is My Problem? 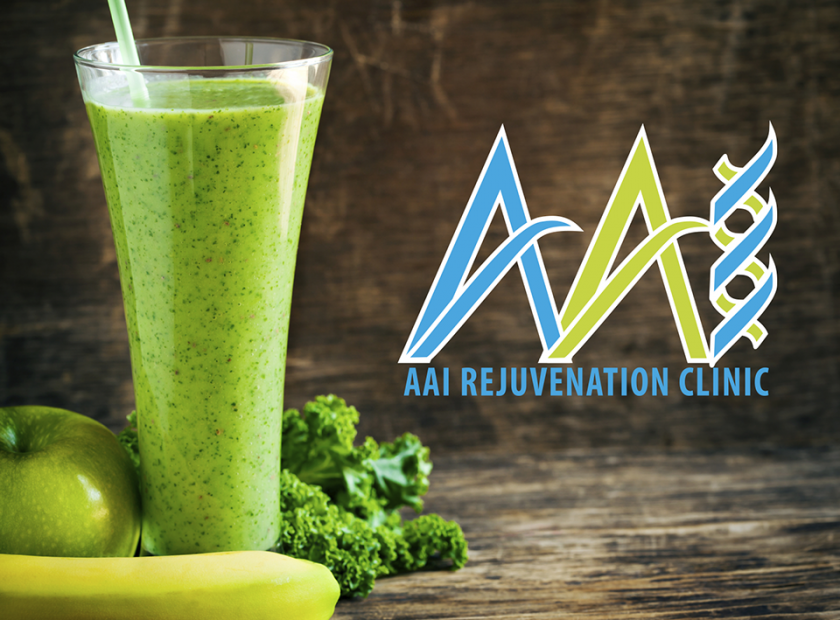