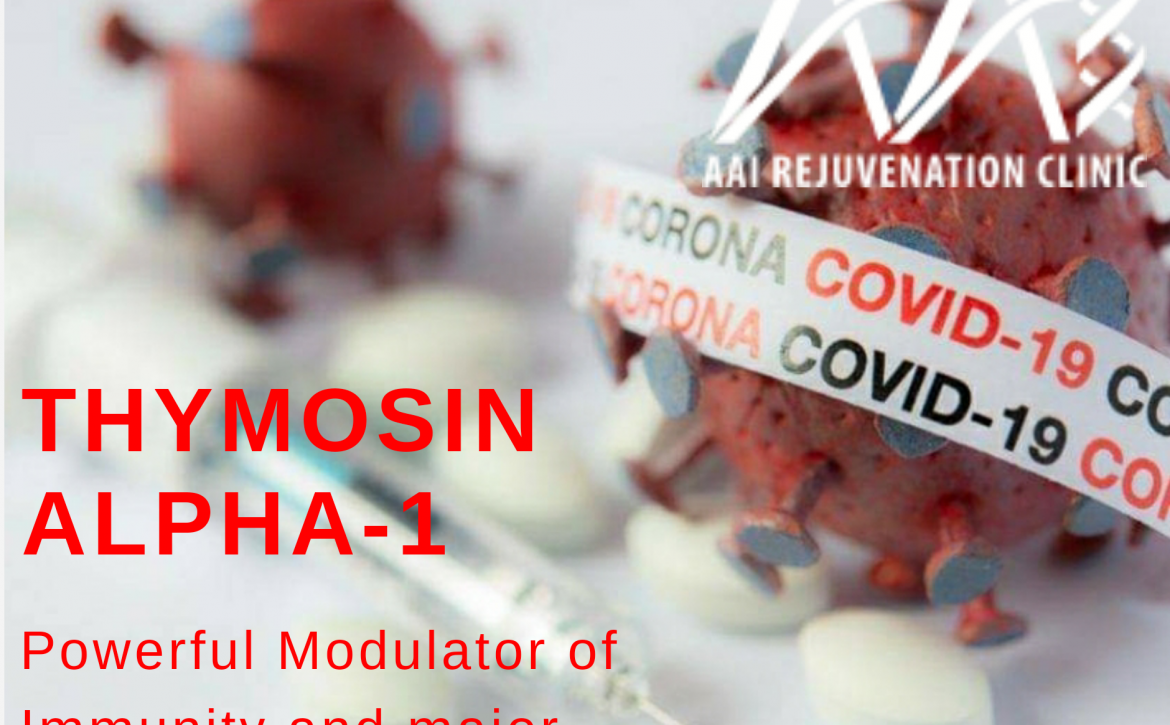 Thymosin Alpha 1: Reduces the Mortality COVID-19 by the Restoration T-cells. 5 (8)

Thymosin stimulates the development of T-cells. Throughout your childhood years, growing up, your white blood cells, called lymphocytes, pass through the thymus, where they transformed into T-cells.

Once T-cells have fully matured in the thymus, they migrate to the lymph nodes (groups of immune system t-cells) throughout the body, where they aid the immune system in helping fighting disease. Also, some lymphocytes, regardless if they reside in the lymph nodes or thymus in the body, can develop into cancers, also (known as Hodgkin disease, and non-Hodgkin lymphomas), and can also be harmful to the cell.

Though the thymus gland is only active until puberty as we grow, the endocrine and the lymphatic gland plays a significant role in the body of your long-term body health.

The thymus is a tiny gland in the body organ behind the breastbone that plays a vital role in the immune system and the endocrine system. The thymus begins to atrophy (decay) during puberty, its effect in “training” the T lymphocytes to fight infections and even cancer in the body.

The Anatomy of the Body

The thymus gland lies in the chest in the body, directly behind the breastbone (sternum), and in front of the heart in the area between the lungs called the anterior mediastinum. Sometimes, however, the thymus gland is found in another (ectopic) location, such as in the neck, the thyroid gland, or on the lung’s (the pleura) near the area where the blood vessels and bronchi enter the lungs.

It is considered a lymphoid organ (an organ of the immune system) similar to the tonsils, adenoids, and spleen.

Cells of the Thymus

Several different cell types are present within the thymus gland:

The thymus gland is also home to some macrophages. Macrophages are known as the “garbage trucks” of the immune system because they eat foreign matter. Dendritic cells and a few B lymphocytes (the types of lymphocytes that produce antibodies) also reside in the thymus.

The thymus gland is large in infants, but after infancy, it grows and reaches its maximum size during puberty. After puberty, the thymus gland shrinks and becomes replaced mainly with fat.

The gland is tiny in older adults, but can sometimes atrophy prematurely in response to severe stress. The term used to describe the atrophy of the thymus gland with age is “thymic involution.”

The thymus gland is very active from before birth until puberty. It functions as both a lymphatic organ and an endocrine organ (an organ of the endocrine system that produces hormones). To understand the role the thymus gland plays in immunity, it’s helpful to first distinguish between T lymphocytes and B lymphocytes.

T-cells (also known as T lymphocytes or thymus-derived lymphocytes) mature in the thymus gland and play a central role in cell-mediated immunity, meaning the batteries themselves are active in fighting off foreign invaders such as bacteria, viruses, cancer cells, and more.

In contrast, B lymphocytes are part of the humoral immune system and produce antibodies directed at specific invaders.

As part of the adaptive immune system, the thymus can be thought of as the T lymphocytes’ training ground. During childhood, immature T-cells (called progenitor cells) originate in the bone marrow travel via the bloodstream to the thymus gland, where they mature and differentiate into specialized T-cells.

T-cells in the thymus differentiate into three primary types.

The immature T-cells that leave the bone marrow enter the thymus in the cortex (known as the thymus). During “training,” these cells are taught to recognize antigens associated with foreign cells and matter in a positive selection process. Cells are positively for usefulness.

Once the T-cells have learned to recognize specific pathogens, they travel to the medulla to undergo “negative selection.” In the medulla, the mature T-cells introduced to the body’s antigens. Since T-cells that would react with the body’s antigens could attack a person’s cells, they eliminated. T-cells negatively selected for autoimmunity, and these self-attacking cells either die or turn into regulatory cells.

The survivors exposed to hormones produced by the thymus gland complete their maturation before being released to do their job (circulating in the bloodstream or waiting in the lymph nodes for foreign invaders).

The thymus gland may produce small amounts of hormones produced in other areas of the body, such as melatonin and insulin. Cells in the thymus gland (such as epithelial cells) also have receptors through which other hormones can regulate its function.

The mature T-cells derived have a few significant roles.

T-cells are part of the adaptive immune system, in which each T-cell has trained to recognize a particular antigen. When exposed to a foreign cell, cytotoxic T-cells lock onto the battery and kill it with assistance from the helper and regulatory T-cells, It will also be referred to as cell-mediated immunity, as it involves the use of immune cells to fight infections.

This function helps prevent the development of autoimmune disorders, which are medical conditions in which the body attacks its tissues rather than foreign invaders. If the thymus gland removed early in life, a person could develop one of these disorders.

In recent years it’s been determined that aging isn’t merely a process in which the body wears out, but is an active process. In other words, we designed to age. The involution of the thymus gland may be a form of programmed aging, with the complexity (beginning around age 60) being the trigger for the deterioration of the immune system with age.

This decrease is immunity resulting from thymus involution can increase the risk of infections and reduce the response to vaccines.

Several studies have looked at methods to delay the atrophy of the thymus with hopes of slowing the aging process. Early studies suggest that calorie restriction may slow the atrophy, but the research is still in its infancy.

Some several diseases and disorders can affect the thymus gland, ranging from genetic disorders that are evident at birth to cancers that are most common in older adults. These disorders can lead to problems with immunity and autoimmunity, such as myasthenia gravis4 and hypogammaglobulinemia.

The developmental disorder called DiGeorge syndrome is an uncommon condition marked by a significant reduction or absence of thymus function. Caused by a gene mutation, and children with the disease will have severe immunodeficiency, a high risk of infections, and hypoparathyroidism.

Enlargement (hyperplasia) of lymphoid follicles in the thymus gland often seen in autoimmune diseases such as myasthenia gravis, Graves’ disease, and lupus.

On their own, thymic cysts are often an incidental finding, but they can be important because they sometimes hide cancer (thymoma or lymphoma).

Tumors of the Thymus Gland

The symptoms of thymomas may be related to the tumor’s location in the chest (such as shortness of breath). Still, these tumors may also be discovered due to paraneoplastic syndromes associated with cancer. There are several of these types of conditions.

Thymomas may also cause a condition referred to as thymoma-associated multiorgan autoimmunity. This condition is similar to the rejection seen in some people who have had organ transplants (graft vs. host disease). In this case, the thymic tumor produces T-cells that attack a person’s body.

Another common reason for this surgery is for a person with thymic cancer. Also, myasthenia gravis (MG) is another condition treated with thymectomy. When the thymus gland removed, roughly 60% of people with myasthenia gravis achieved remission.

However, it can take months to years for these effects to be apparent with myasthenia gravis. When used for MG, surgery usually done between puberty and middle age to avoid the potential consequences of removing the thymus gland earlier.

The thymus gland provides a critical role in cell-mediated immunity. Fortunately, a significant part of this benefit occurs before birth (the T-cells formed during development in the uterus are long-lasting).

However, there are potential consequences of removal early in life, like when the thymus is removed during heart surgery in infants. It appears that early dismissal can increase the risk of developing infections. The development of autoimmune diseases (such as autoimmune thyroid disease), the risk of atopic disease (allergies, asthma, and eczema), and possibly the risk of cancer, like T-cells, perform a vital role in preventing cancer.

There is also some evidence that thymus removal may be associated with premature aging of the immune system.

A Word From AAI Rejuvenation Clinic

The thymus gland is a tiny gland that virtually disappears with age but plays a vital role in immunity and autoimmunity for a person’s lifetime. As changes in the thymus gland have linked with the aging of the immune system, and such virus-like COVID-19, researchers study ways to delay the atrophy. Since many autoimmune diseases have increased significantly in recent years, more will likely learn about the proper health of this gland in the future.